The adult common bedbug is a wide, flat and brownish insect. The bedbugs that have not fed for a long time are quite light in colour.

The larvae stage of the common bedbug is quite similar to the adult insect, but they are smaller and lighter in colour.

The common bedbug is one of the best known external parasites in apartments. It is part of the extensive order of Hemiptera, most species of which use their sharp sucker to suck liquid from plants or their prey insects. 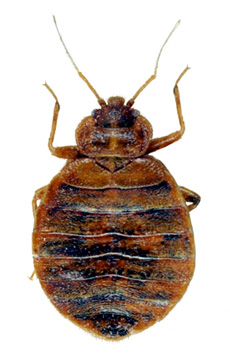 The common bedbugs have specialised in feeding on blood, originally from bats, but also from humans, already during prehistoric times. Some closely related species still prefer to feed on bat or bird blood. The blood-sucking bedbug species residing in apartments could be a bat bug in some cases, and even more rarely, a bird bug.

The common bedbug requires one meal for each of its five exuviations. The adult common bedbug may live up to one and half years, which is a high age for an insect. Both the males and females suck blood. The common bedbug feeds on a sleeping human, and is most active around one hour before dawn.

The common bedbug moves around during the night time. During the daytime, they hide in the cracks of furniture, behind paintings, in the seams of mattresses or, for example, in the frame of a spring mattress. They leave dark spots of excrement on the lower surfaces of beds and bed legs, as well as bloody spots on the sheets.

The sharp sucker of the common bedbug has a separate spout and sucking ducts, which means that they do not spread disease carriers as easily as the castor bean tick, for example. The common bedbug sprays saliva into humans, which at first has a slight numbing effect, but, afterwards, causes itching and swelling for most people.

If you detect common bedbugs in your apartment, immediately contact your building manager in order to start an extermination process carried out by professionals. In regard to the bedbug bites, visit your health centre, if necessary.

Long-term heating or freezing works well on common bedbugs. Any objects and textiles that can take heat treatment can be left in a sauna for a few hours (do not throw any water on the sauna stove). The sauna should be heated to +70-80 degrees. A bedbug dies in one week at a temperature of -18 degrees Celsius. The bed clothes should be washed at 60 degrees or be put through a tumble dryer cycle in a protective bag intended for the use, which stops the bedbugs from escaping into the frame of the dryer.

Do not carry out the extermination by yourself, as the pesticides intended for consumer use do not have any effect on the common bedbugs. They will only drive them deeper into their hiding places or even to neighbouring apartments. On the other hand, the common bedbugs also become immune to the pesticide, which means that the substances used by professionals will also have less impact. The common bedbugs can also move into the neighbouring apartments, through holes in the walls or ceiling. Therefore, you must act immediately, if you discover or suspect bedbugs in your apartment.