The German cockroach is yellowish brown in colour and the front of its back has two dark brown stripes. The wings cover the back of its body completely. Its antennae are long and filamentous and curve backwards. Its feet curve outwards and are long, thin and prickly. The female cockroach has a strange, handbag-like pouch, where it carries its eggs.

The hatched larvae look like the adult cockroaches, but have stumped wings. 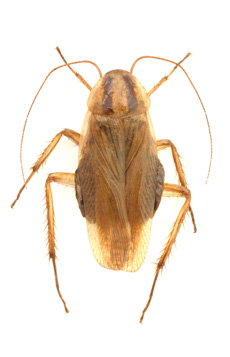 The German cockroaches form small communities in suitably warm (at least +20 °C) places. During the daytime, they hide in their holes and at nights, they move around looking for food. They drink water and eat almost anything that humans eat.

In addition to apartments, they live in bakeries and other food establishments, hospitals and in any places that provide sufficient heat and moisture. The cockroaches can be found, in particular, in machinery, pipes, cable channels and encased structures, as well as in bathrooms and shower premises.

The German cockroach can spread to new areas in various transport packages and platforms. They can also be seen at landfill sites, where the rotting process produces warmth.

If you see cockroaches in a high-rise building, please immediately contact your building manager, as they have usually spread into several apartments. If you decide to exterminate the cockroaches yourself, you should first study their possible hiding places by using a pesticide aerosol intended for indoor pests, which would force the cockroaches out of hiding.

Cockroaches are normally found in kitchens and other damp, warm premises. The kitchen and bathroom cupboards, as well as the cleaning cupboard and ventilation holes, should be treated with an aerosol, which has a long-term effect. The treatment should be done monthly, until there are no longer any sightings of the cockroaches. Do not wash the surfaces, while the pesticide is still in effect.

The products have their own withdrawal period, but the handler should also use a breathing mask and disposable gloves for protection. Any food stuffs and aquariums should be protected and other house pets need to be taken away from the apartment for the duration of the treatment. Those suffering from asthma or allergies, pregnant women and small children should leave the apartment for, at least, five hours.

The German cockroach, as well as other species of cockroach, do not tolerate freezing temperatures well and they die off quickly in temperatures below  -10 °C. A heat treatment of, at least, two hours in +70 °C temperature will also destroy the cockroaches, even though they tolerate heat fairly well.