During the summer, squirrels are typically reddish brown in colour. Their belly has a lighter spot. Their winter coating is greyish and includes ear tufts and a fluffier tail. Different colouring can be seen at times.

Squirrels have spread from coniferous forests to urban gardens and parks during the last century. Squirrels are also frequent visitors in suburbs, where they can climb walls and visit indoors, as well. The squirrel is the emblem animal of Helsinki. 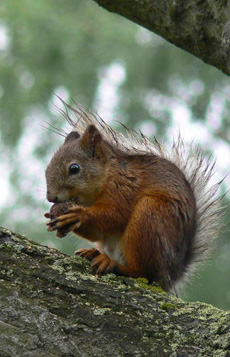 Squirrels mainly feed on the seeds of conifer trees, nuts and acorns, but they also eat mushrooms, the bark of young trees and insects. Sometimes, squirrels may raid bird nests. Squirrels store food in hollow trees for the winter season.

A squirrel may have several summer and winter nests in its living area. Summer nests are built with leafy branches in branch junctions. Winter nests and nests where cubs are born are larger and closer to the tree branch. They may have several entries or two sections. The diameter of winter and cub nests are 30 to 40 centimetres. Nests can often be found in large birdhouses and buildings, as well.

The female squirrel carries the cubs from 35 to 40 days and usually gives birth twice during the summer season – once in March or April and once again during the early summer. The female gives birth to 3 to 7 cubs at a time, and they will leave their mother, when they are eight weeks old.

In residential communities, whether it is a two-family house, terraced house or a high-rise building, squirrels should not be fed without the permission of all residents, or it could lead to problems in neighbour relations. Squirrels, after all, do not only visit the balcony of the person feeding them, but start visiting the neighbouring balconies, as well, which may cause problems for people, who want to lull their babies asleep outside, grow flowers on their balconies or just keep their balcony door open.

Squirrels in wood-construction houses do not cause a significant risk to hygiene, but they may damage the structures, especially heating insulation, or disturb the peace during the night time. Open attics and roof triangles are typical places that may attract squirrels. Squirrels rarely gnaw undamaged, healthy wood to make routes, but they may, however, make the ventilation gap between the wallboards and the ceiling bigger, so that they can fit in.

Access routes should be blocked between the late summer and early spring, when the squirrel is away from the nest. If this is done during the late spring or in mid-summer, the danger is that the cubs will starve in the nest, as their mother no longer has access to it. When blocking the route, remember to use sturdy enough materials, such as sheet metal or iron netting, and mount them by screwing them in, for example. Squirrels can easily twist off chicken wire structures or flimsy nails.

Catching a squirrel, also if caught alive with a trap, principally requires a special permit from the Finnish Wildlife Agency. This method is not even very effective, as squirrels tend to quickly move back into any appropriate places.

According to some observations, cat repellent sold in hardware stores could also work on squirrels. The bergamot oil-based solution has a pleasant scent to humans, so it can be tested on balconies or attics, where squirrels are unwelcome visitors.