Black ant, around half a centimetre in length.

The common black ant is the most common species of ant to be discovered indoors in Finland. They may appear in the kitchen as large groups during the spring and summer.

Their nest is usually outside, in the stone foundation of the house or under the lawn, but it may also be inside the building, in which case they may also be discovered indoors during the winter. 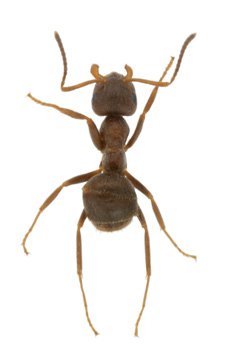 The common black ant does not cause any significant damages, unless there are a large number of them in the apartment.

There are several pesticides available on the market for exterminating ants. The nests should be destroyed as well as possible, although it may be difficult, as they can be very deep into the earth.  If the nest is in the structures of the building, help from an external specialist is often required.

The ant is around 2 mm long, yellow in colour, with a dark tip of its back body. At a quick glance, it may look like a grain of sand.

The pharaoh ant comes from the tropics. It lives in places, where the warmth and level of moisture remain constant and where they have access to water and food. They are omnivores. 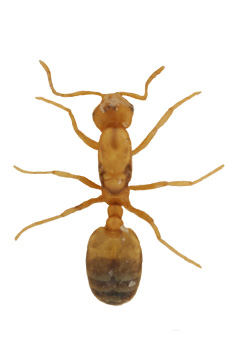 The species reproduces at relatively high temperatures (+18 oC). It nests in all possible cracks. The same building may have several nests.

The pharaoh ant spreads as small communities, which include the queen and a few workers.

The workers acquire nourishment for the queen, the male ants and the larvae growing in the nest. The pharaoh ants eat various things, in particular from the animal kingdom, including dead insects and other dead animals as well as the excrement of rats and mice.

When the pharaoh ants have access to electric appliances, such as a television, computer or coffee maker, they can cause it to short circuit. Pharaoh ants like warm places and are attracted by district heating channels, through which they can crawl from one apartment to another.

Extermination of the species is often difficult and requires help from a professional exterminator. The ant nests need to be found, but they are often located in a place where the pesticides cannot reach them.

A fully grown ant is matt black and has dark reddish-brown middle body.  Males and females have wings, workers are wingless.

The carpenter ant is the largest ant species in our country. The queen may live for up to 10 years. It lives in coniferous forests and builds its hive into the lower parts of dead or living trees. 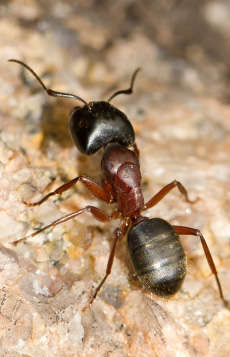 The carpenter ant can also nest in buildings. The hive can be located anywhere in the wooden structures, for example, the wall timbers or in the floor, and there may also be several nests in the same house.

The carpenter ant does not eat wood, instead it feeds on insects, the honeydew of greenflies and plant buds. It only chews wood to create space for the hive.

Winged males and females swarm during the early summer, during which they also fly inside buildings.

The hive is usually just a few timber metres long, but the hollow hive tunnels can be very harmful, if they are located in load-bearing structures.

The best way to look for a carpenter ant’s nest is to listen to the scratching sounds, follow the swarms and feel the temperature of the wood, which rises in spots where the hive is located.

The hive is pierced and sprayed. You can also use boiling water. Damaged wooden parts need to be replaced. You should also try to locate the routes the ants use outside the apartment and carry out the extermination there, as well. Ant powder is a handy and effective option on the ant paths.