Centipedes are flat and each of their segments has one pair of legs. 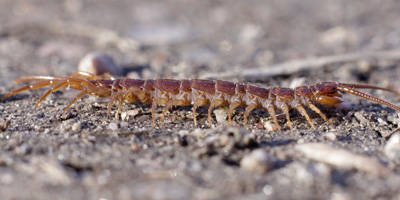 Close to apartments, the most common species is the up to 30 mm long brown centipede (Lithobius forficatus), which has 15 pairs of limbs and short antennae formed of the segments. The first pair of limbs has transformed into jaw appendages, which point to the sides and are thick and hook-like. There are claws in their tips, which are connected by a duct to a venom gland.

Centipedes are predatory arthropods, which occasionally wander into cellars and other damp premises. They hunt for isopods, for example.

The animal’s skin is highly permeable to moisture, and centipedes are, therefore, sensitive to dryness. The species are mostly active during the night, dusk or dawn, when the moisture level of the air is high. Centipedes live in the soil, rotting vegetable matter or in the cracks of tree bark.

Centipedes are often confused with millipedes (Diplopoda), which, however, are herbivorous.

Centipedes do not cause any damage, instead, they are beneficial animals.

Millipedes are cylindrical and have a hard surface. They have two sets of limbs on each segment of their body and the number of limbs may vary from around twenty to over a hundred. The first set of limbs has been reduced into hook-like appendages. The antennae are short and formed out of eight segments.

Millipedes move quite slowly and curl up, if they are bothered. The millipedes live in damp soil or in vegetation litter. They mostly feed on decomposing plant waste.

Millipedes live in large numbers in composts, for example. They can be carried into residential buildings with plotted plants or if composted soil is used for decorative plants. Millipedes favour damp spaces and, therefore, usually stay in the flower pot, although they may sometimes drop on the floor. For example, a small 5 to 15 mm long Nemasoma varicorne millipede may live in flower pots.

Millipedes do not cause damage and loose insects can be put back into the flower pot or taken outside.