Wasps, bees and bumblebees belong to the order of Hymenoptera and the infraorder of Aculeata. The insects in the order usually have two sets of film-like wings.

There are over 10 different species of wasps in Finland. In general, they have transparent wings, horizontal stripes on the back of their body and a poison stinger.

Wasps include both wasps that form communities and solitary wasps. Community wasps build their hives in the soil, in trees or in buildings, for example in attics. 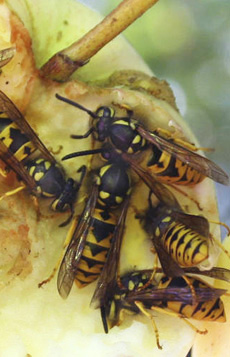 Only the queen of the hive hibernates, which is why wasps do not gather honey for the hive’s winter sustenance. Wasps make annual hives. The queen wasp wakes in the spring and begins to seek a new spot for a hive.

The queen starts building the new hive. Wasps often build their round hives under eaves or in the attics close to the ceiling. A wasp hive resembles paper and is usually grey. Wasps use wood matter as construction material. Inside the hive, the queen builds a honeycomb, where it starts growing new offspring. The larvae hatching from the eggs develop into workers, which continue building the hive and start gathering food, while the queen focuses on laying eggs. A full-size wasp hive may have thousands of individual wasps.

Wasps feed their larvae with meat, such as insect larvae or pieces of carcass. Adult wasps feed on the nectar of flowers. Near the end of the summer, wasps grow males and queens in special cells. When these mature, the community starts to fall apart. The workers use all their time on finding and eating fruit and other sweet food, whilst they may also fly indoors. The workers and males die, at the latest, by October.

Wasps use their poison stinger for paralysing their prey and defending themselves. A wasp sting may be dangerous to a small child, someone who is allergic to wasps or if the wasp sting is located close to the mouth or the throat. The stung area usually has burning pain and swelling. A cold poultice, cortisone ointment or an anti-adder venom medicine can be applied as first aid. If you are allergic to wasps, please seek medical treatment.

Individual wasps that have accidentally flown indoors can be exterminated with pesticide aerosols. If a hive is in a difficult location, it is best to destroy it during the evening, when the wasps have stopped flying and are all inside the hive. When destroying a hive, please ensure that you are fully protected. A hive can be cut off and dropped into a bag, which is then destroyed. The other option is to spray the hive full of pesticide aerosol, through the opening at the bottom of the hive. The treatment should be carried out again the next evening to ensure that all the hive residents are exterminated.

The back of the European honey bee’s body has thick fur and brown or black horizontal stripes. 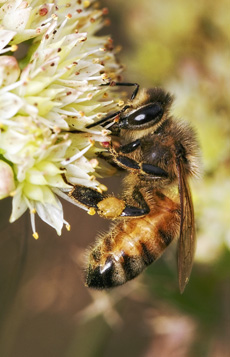 A European honey bee only stings when defending its hive. Soon after the sting, the bee will die.

Bumblebees have a hairy and thick body. Some of the species have back hair and yellow stripes, some have a reddish brown or light yellow-grey mid-body.

There are around 30 species of bumblebees in Finland. Thanks to their hairy and thick bodies, they are excellent pollinators. Bumblebees feed on nectar and pollen, and they produce honey for their own sustenance.

Bumblebee hives are in holes in the ground, tree stumps or decomposing trees or in wall structures, for example. The bumblebee nest is somewhat similar to grey egg box. The number of bees in one hive is, at most, a few hundred. Only the queens hibernate.

Bumblebees can sting humans, if they are held in a hand or if they are defending their hive. The bumblebee stinger does not have barbs, unlike the stingers of domesticated bees, which means that they can sting their victim several times. The sting can be painful.