The bacon beetle is around one centimetre long, quite black in colour and narrower than the fur beetles. It has a light stripe on its back with six black dots on it. Its antennae are short and mace-shaped.

The larva is brown, around one centimetre in length, has sparse fur and two upwards curving claws at the end of its body. One generation is produced annually.

The bacon beetle is a native species of Finland and resides in dry carcasses, bird nests, etc. It mostly eats dead animals. The beetles can also eat scraps of food. During the autumn, they may eat dead flies in the attic.

The bacon beetle can sometimes harm textiles, furs and pelts.

If there are a large number of beetles, they can be exterminated in the same way as fur beetles.

Link to the extermination section 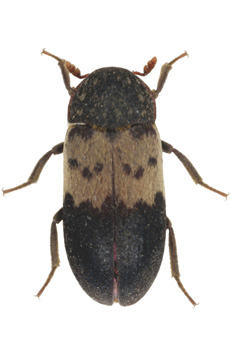 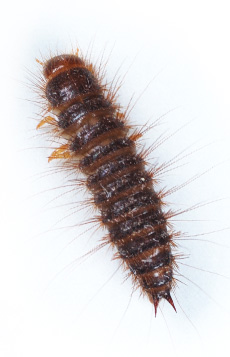