The forewings are straw-yellow, the back wings grey-yellow and surrounded with grey lashes. The moth’s head is russet coloured. The size varies significantly between the different moth populations. 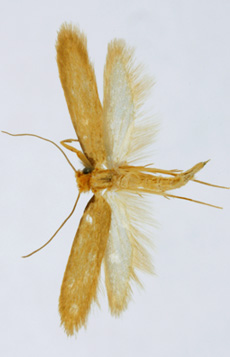 The clothing moth is not a native species of Finland. Adult moths may fly around during all seasons. It is usually apartment-specific and quite rare these days. Clothing moths have been found in the insulation materials of building structures, if they are made of animal hair. This is why they are also called “building structure moths” in Finnish, although the species is the same.

Moths occurring in apartments are usually from old products, which have been brought in from an old storeroom.

The larva eats wool fibres and makes holes into cloths. In particular, goods felted from raw wool and carded yarn are vulnerable to damages caused by clothing moths.

Damages can be prevented by storing unused woollen clothes and furs in plastic bags. The larvae will die during freezing or clothes washing. They are exterminated in the same way as fur beetles.

Link to the extermination section